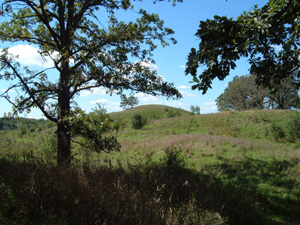 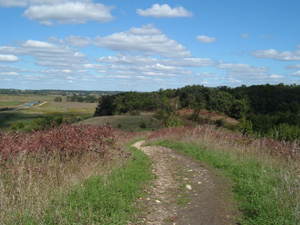 I first became aware of Glacial Park when I was paddling my canoe upriver on Nippersink Creek and was surprised to see a large hill (I later found out it is actually a Kame) sticking up out of the extremely flat prairie area along the river. It looked so out of place that I first thought it may be a massive landfill trash mountain. I was pleased to later find out that it is natural and is part of a large park. Always on the lookout for vertical relief, I knew I would need to get back here someday (without the canoe) and check out Glacial Park.

I was not disappointed. Glacial park is a very scenic park with areas of prairie and woodlands and plenty of rolling hills. The Kames are large hills created by melting glaciers. They are basically large piles of gravel that have eventually become covered with soil. The main large kame has a trail over the top of it that provides some great views of Nippersink Creek and the grasslands in the valley along the creek. Although I primarily come here for the hills and woodlands, I have to say that the prairie areas here are pretty special. Unlike the prairies that I encounter in other area parks that are often thick with thorns and bushes and other flesh eating vegetation, Glacial Park has vast areas of grasslands, which are very scenic in the Spring and early Summer. 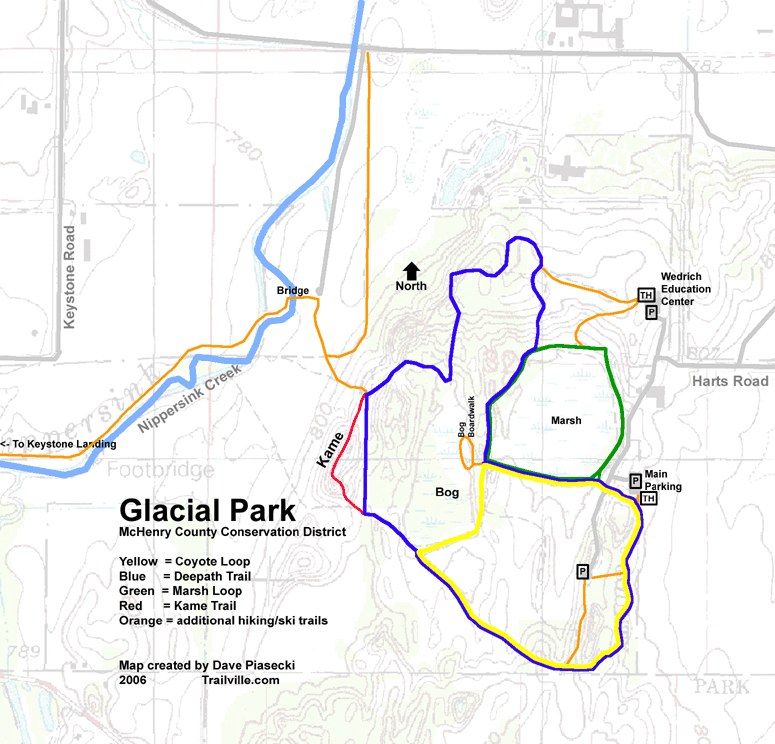 Map Notes: My map is of the hiking and cross country ski trails in the main portion of the park. The entire park area is actually quite a bit larger and has additional horse/snowmobile trails running along the perimeter. I included a topographic map as the background for my trail map to give you some idea of the vertical relief in the park. The color coding and naming of trails on my map may not necessarily coincide with the official park trails. The reason for this is that it was a bit unclear to me which trails were which. The trail markings are a bit inconsistent; there were a few places where there were color coded markers, but again this was only in a few spots. There were sometimes signs at intersections that referred to trail names and other times referred to destinations along the trails such as "Kames", "Amphitheater", "Bog", etc. Probably the most confusing thing I ran into were a couple of places where there were "No Hiking" signs on the trail. The best I could make out was that these sign were placed where there use to be another trail connecting with the hiking trail, but since the other trail was now completely overgrown it looked like the no hiking sign was on the current hiking trail. It would have made more sense to set the sign back a little (a few feet) onto the old trail rather than placing them right on the main trail.

That being said, the trails are actually pretty easy to negotiate providing you take a map (or at least review one beforehand) and are aware that the signs on the trail are somewhat confusing. Many of the intersections are in open areas where you have a pretty good field of view to figure out where you are.

From the official park trail map, they list the following trail names and distances

The color coding I saw on the trail designated the Coyote Loop as Yellow and the Deerpath Trail as Blue. I drew the Marsh Trail as Green, the trail over the top of the kame as Red, and all other trails as Orange on my map, but this is just for demonstration purposes and does not coincide with any trail markings. I want to again mention that due to inconsistent markings on the trails (or ones I didn't notice), I'm not sure that the specific routes I show for the named trails on my map are the exact same routes the park has them designated as.

For Bog enthusiasts, there is a short boardwalk (plastic boards) that takes you into the bog in the center of the trail system. There is also a wildlife viewing platform at the southeast end of the Marsh Loop. The "Ampitheater" (a stone seating area on top of a hill overlooking the rolling prairie below) is located on the trail just west of the Wedrich Education Center.

With the exception of the short trail that runs over the top of the Kame (shown Red on my map) and some of the smaller orange connector trails which is a little narrower and rugged in spots, all other trails are 6 to 8 feet wide mowed grass, wood chips, or natural surfaced trails that are very well maintained. 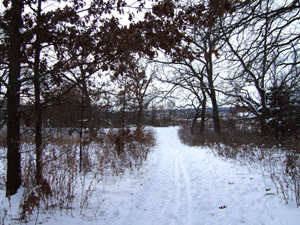