--Dave (talk) 17:52, 26 April 2013 (CDT)---- With the recent flooding, you can expect pretty much all underpasses to be flooded and some sections of the trail itself flooded. It will take quite a while for the water levels to come down (see water level notes on main page).

--Dave 09:25, 27 September 2008 (CDT) Flood waters have receded and the underpasses are clear and dry (throughout Lake County). However, as of yesterday (9/26/08) the underpass at Washington Street was closed due to construction on the bridge (you absolutely could not get through). I don't know if this was just for the day due to the specific demo work they were doing on the bridge yesterday or if this underpass will be closed for an extended period of time. There really is no good alternative route to bypass this underpass, I crossed the road through the construction on my way down yesterday and tried an alternate road route on my way back, but both options were rather unpleasant (and a bit dangerous). They're still doing construction on the bridge at I94, but have done a good job of keeping the trail open during construction.

--Dave 16:49, 24 June 2008 (CDT) Flood waters have receded and the trail crews have already patched up the eroded sections and removed downed trees. I rode from Van Patten Woods to Old School Forest Preserve and back today, and everything was dry, firm, and in great shape.

--Dave 11:09, 13 June 2008 (CDT) Some pretty major flooding is occurring along the Des Plaines River, so in addition to the underpasses being impassible, you can expect portions of the trail to be flooded as well. It will probably take at least a week for the waters to subside enough to get through the underpasses.

--Dave 15:30, 13 May 2008 (CDT) The spring flooding has subsided and the underpasses are clear and dry. There is some major construction occurring on the I94 Bridge and I'm guessing that it may result in some temporary closing of the trail there. It looks as though they are trying to keep the trail open during construction (they've put in some temporary safety structures), but I would be prepared for possible closures.

--Dave 09:03, 24 August 2007 (CDT) Flooding Report: There is major flooding along the Des Plaines River currently and most if not all of the underpasses will likely be impassable. In addition, I would expect portions of the trail itself to be flooded. With waters this high, it could take up to a week or more to recede enough to make some of the lower underpasses passable. Check the notes on the main DPRT page on water levels for more information.

During 2007, they added some new trail to the incomplete section at the southern end of Lake County, but there is still about 1/4 mile missing and it looks like it may be that way for a while. I show the new trail as a dashed red line on my map (below), but be aware this trail is not yet officially open. The section running south from West Riverside Road is not yet marked but appears to be open for use (there is no sign or barricade present identifying it as closed). It ends at the north side of Par King Skill Golf, but there is an asphalt pathway there that connects to Milwaukee Ave. The new trail that runs north from Estonian Lane currently dead-ends behind the parking lot behind The Cubby Bear North restaurant. As of October, 2007 this section of trail was closed and has a fence running across the entrance at Estonian Lane and also there is a fence across the parking lot behind the Cubby Bear blocking access there. Update: 2009, You can now access the trail behind the Cubby Bear. 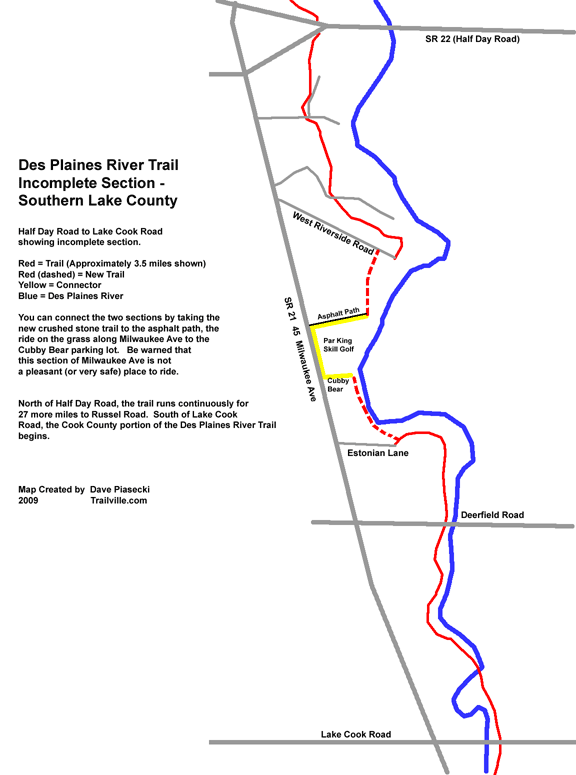 --Visitor 17:33, 7 July 2008 (CDT) I was on the DRT today and construction has continued north from Campground Road. The underpass is complete to the north of Rt. 12. A good mountain bike can make the unfinished trail to Rand and Ballard Roads intersection. Enjoy and thanks for a great resource.

The construction at the end of the trail at Rand Road in Des Plaines involves a flood control project and includes the missing link for the Des Plaines River Trail. From the south, Campground Road will be resurfaced and improved (it runs between Algonquin Road and Miner/Dempster streets). I'm not sure about this part of the trail — you may have to ride on Campground Road itself or there may be a path to ride on next to the road. In any case, the trail will run under the Miner Street/Metra bridge, then follow the river around to the intersection of Rand and Ballard Roads, where you can rejoin the existing trail and continue to Golf Road and points north. Pilings have been driven and the project should be finished sometime next year (2008).

Advice or tips anyone?

Thanx for this site I'm glad I read it before I started my trip. I've been down to 132 or so, but on Friday 6-19-09 I plan to bike to a friends house in the 2200 block of Chicago ave in Chicago. I plan to take the Des Plaines system as far south as possible and then CTA the rest of the way. Can I leave a vehicle overnight at the trailheads on Russel or 173? Has any who has done this have any advice? Thank you.

I rode the entire length from Russell Road to North Avenue Chicago 6-17-2011. The lower half has not been maintained at all. Although the river is below flood level, no one has unplugged the the drainage canals, and several of the underpasses including Lawrence, are still full of water! Smelly foul water full of debris and trash force you to climb the guard rails and make dangerous crossings. Trees that have obviously been there for a while are blocking the trail. Hopefully when the ground dries and hardens, Parks will get in there and do there job.

Need to update map, there is now a connector trail just north of Ballard road so you can cross at the light and stay on trail the entire time - Looks to have been down between Summer 2010 and Winter 2011 (last times I came through)