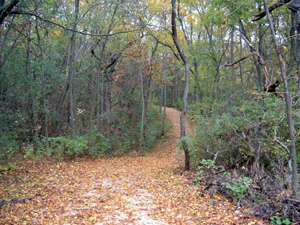 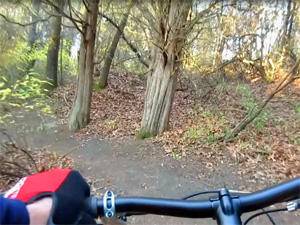 Silver Lake County Park is best know for the swimming beach on Silver Lake, but also has some trails that run through the hilly inland areas. There are about 2.5 miles of wide trails suitable for hiking , cross-country skiing, and mountain biking, plus another 6+ miles of new singletrack designed specifically for mountain biking (see mountain biking section for notes on new trails). There are also some smaller sections of narrow hiking trail.

Yellow on the map represents the main multi-use (hiking, biking, skiing) trail. The wide main trail is crushed stone in some places, grass covered in others, and dirt or wood chip covered in others.

The Orange dashed lines on the map represent where you can connect sections of trails by going through the open park areas. These connectors are not marked, I just show where you have open space to use to connect. The solid Orange trail is a short interpretive hiking trail.

Red represents some narrower (possibly unmaintained) trails within the park. Some may be difficult to follow. There may be additional trails not shown on this map. 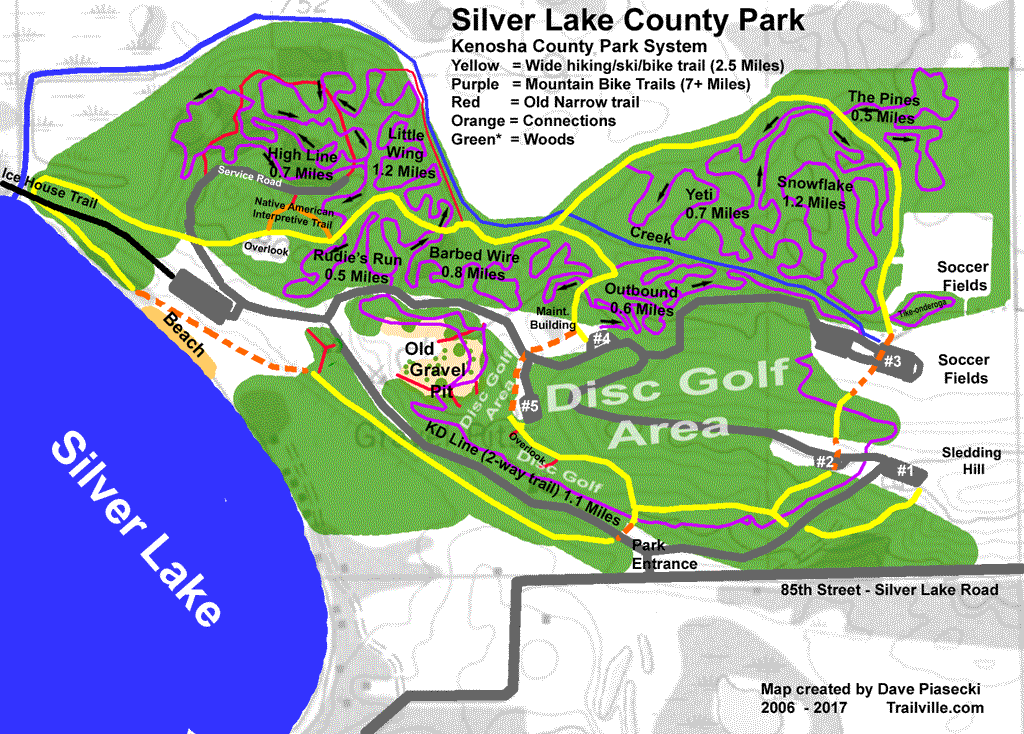 Update spring 2017: As of April 2017 we have over 7 miles of singletrack and are still building.

I show the trails in purple on the map.

Mountain bike trail conditions are available at Kenosha Off-Road Bicycle Association (KORBA) and via the Trail Hotline at (262) 857-1876 . Please do not ride when trails are closed or muddy.

The mountain bike trails have names now, so I'll go ahead and use those to describe the various sections. They are also designed as directional trails so note the arrows on the map. Tike-onderoga and Snowflake are the easiest trails, Outbound, The Pines, and Rudies Run are a little more difficult but still rather easy, and Barbed Wire/Little Wing/High Line are the more difficult trails.

The advanced trail(s) totals around 3 miles currently, but there is a lot packed into that mileage. There's not much flat trail in here, you're pretty much always going up or down. This trail will be continue to be extended in 2015, so expect regular changes. As new trail is added, it can be ridden, but you may have to double back to get out.

The old narrow trail (shown RED) that comes off the service road in the Northwest portion of the park is going to be closed. It still exists for now so I want to keep it on the map, but it will be getting blocked off to avoid confusion on the new mountain bike trails. Hikers that have used this old trail in the past, can hike the mountain bike trails instead (look at the map and you can see there are several sections of trail you could use in place of the old trail)

Winter mountain biking (and especially fat biking) have become a big deal at Silver Lake, with a growing number of regular riders at the park.

During the winter of 2013/2014 grooming for Fat Bikes was started on the wide trails (Yellow on Map)using the old cross-country ski grooming equipment. During the 2014/2015 winter they have been machine grooming the wide trails and connectors in some of the open areas, and some of the singletrack (mainly Snowflake). The winter of 2015/2016 began with new grooming equipment (a New Rokon) and a lot more riders with fat bikes. Not everything gets groomed, but unless the snow is really deep, the trails that aren't groomed will get packed pretty well by riders within a few days of snowfall. Exactly what gets groomed varies based on conditions, but Snowflake, Yeti, Rudie's Run, and The Pines are the most likely to see grooming. I was happy to see more riders this winter riding the more difficult trails. They can be tricky in spots, but under the right conditions can be a lot of fun, especially when other riders pack them in for you. The video on the right shows a late-season ride on the advanced trails.

In mid to late winter you may even see grooming on the lake. Grooming is being conducted by volunteers through Kenosha Off-Road Bicycle Association (KORBA)

Even though the area is somewhat hilly, the hiking here is pretty easy due to the wide well-maintained trails (the main trails shown in Yellow). With a mix of woodlands, pines, open grassy areas, plus the old gravel pit and, of course, Silver Lake, this is a rather scenic little hike. There is also a nice overlook along the trail just south of parking area #5, and another above the beach area.

I nice hiking option is to start at the beach area, then go east/southeast across the grassy area to catch the with trail that runs parallel to the park road. Cross the park road near the par entrance and when the trail forks, take the left fork that heads toward parking lot #5. You catch an overlook just before parking lot #5. From Parking lot #5 you'll need to hike across the park road and a grassy area towards the maintenance building where you will pick up the main trail again. Follow that around counterclockwise all the way back to the Beach. There will be another overlook about halfway (right above the beach) were you can optional take a shortcut and follow one of the mowed paths down the hill directly to the beach area.

The RED trails on the map also get used by hikers, but they are unmaintained and some of them can be rather hard to follow, especially after the autumn leaves have fallen. If you've previously used the old narrow hiking trails located north and northwest of the service road, be aware that there are quite a few changes in this area due to the new mountain bike trails so don't expect to be able to find some of those old trails.

Though not a lot of miles here, the wide trails (Yellow on map) combined with the hilly terrain make for some pretty good cross country ski trails. The biggest annoyance is the frequent road crossings (park roads). There are some winding downhills here that can be challenging; I think the trickiest one is probably the one a little north of parking area #4. When you get to the big open area west of parking area #3, there is plenty of room to do some additional skiing here. There is a large open hill area (used for sledding) that can be a good place to work on your downhill skills or just play around (video on right shows me skiing on the sledding hill, including a crash).

The cross country ski trails are not groomed for skiing, however starting in 2013/2014 the Kenosha Off-Road Bicycle Association (KORBA) started doing some grooming here on the wide trails to ride "Fat Bikes" during the winter. The video on the right shows me skiing on the trails groomed for biking. This isn't what you would typically find on trails groomed for skiing, but it should be ski-able depending on conditions. It looked like they just ran a 3 or 4-foot wide roller on it to pack it down. They're still experimenting a bit on how they are grooming, so the grooming you see in the video may not be what they do in the future.

Most of the narrow mountain bike trails (Purple on map) will probably not be great for XC skiing, but Snowflake may be worth a try (it is flat to gently rolling)depending on conditions. However, when I was there Snowflake had been ridden in by Fat Bikes resulting in a rather narrow trough running down the center of the trail. That did not make for good skiing.

Fox River County Park is located only a couple miles away from Silver Lake and also provides some trails suitable for cross country skiing. Skiing both parks will give you the equivalent ski experience of a larger trail system.

The Ice House Trail is a new paved multi-use path that connects the western portion of the park (near the beach) with Highway B at Lotus Drive. I show it Black on the map.