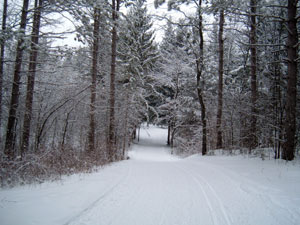 Cross-Country Skiing: The Scuppernong Trails are groomed for classic skiing only (skate skiing is not allowed). Even though most of the ski miles here are easy skiing, all trail loops are considered intermediate because they each have at least one hilly section that would be considered moderate to difficult.

Update: This trail system may no longer be being groomed

I have a couple of problems with this trail system for cross-country skiing. First, is a problem common to many classic-only groomed trails, that is the classic track placed right in the middle of fast winding downhills. If you have fast skis or if the trail is fast and icy, there is no way you can stay in the track on these downhills (at least I can't), yet there is not enough open section of trail to ski next to the track. Therefore the track itself becomes a hazard as it gets in the way of your out-of-track turning. So the hills that would otherwise be the most enjoyable part of the ski, become the parts of the trail you dread. Now I will add that the last time I was out here, all trails had two sets of classic track on either side of the trail (rather than one down the middle) leaving just enough flat trail between them to allow for some maneuvering. And though there are some narrower sections, most of the Scuppernong trail system is made up of wider trails than the typical classic-only trail system. So from that perspective, it is little better than the typical classic-only trail.

My other complaint is with the design of the trail system which is mostly easy skiing, however, since each trail has at least a small section of hilly terrain, there is no easy loop for beginners. And conversely, there isn't really any longer intermediate or advanced loop that isn't mostly easy skiing.

That being said, this is a very scenic trail system that is heavily wooded with some very large old trees and several overlooks. With the exception of the track on some of the downhills, the grooming is very good. The Scuppernong trails also tend to hold snow a little longer than the nearby Nordic Trails or McMiller Trails though with lot of pines on the system, the old snow is often very dirty (use waxless skis in old snow conditions).

The first four miles of the five-mile Green Trail is mostly easy skiing with a few rolling hills. The Northern section is especially flat. After you pass the Overlook Trail (certainly worth the short side trip, and it is usually groomed), the Green Trail splits to the Right from the Red and Orange Trails and goes into a moderately more hilly area. After it joins back up with the Orange Trail you have the most difficult downhill of the system. In 2007, they rerouted this section of trail, so it is no longer as difficult as it was, but it is still a tricky winding downhill.

The 4.2 mile Orange Trail is also mostly easy though you'll find a moderate hill right after it joins back up with the Red Trail and then the most difficult hill after it joins with joins with Green right near the end of the loop.

The 2.3 mile Red Loop hits some hilly areas without going through as much easy sections as the other trails. There is a moderate hill after it joins with Orange and then some more hills as it makes its way back to the trailhead.

Hiking: As I mentioned before, this is a very scenic trail system and therefore is one of the nicer hiking systems in the Kettle Moraine State Forest. The Green and Orange trails go right past some campsites from the campground. If you want some narrower more classic hiking, you can access the Ice Age Trail from several points along the trail or use the connector from the trailhead.

Mountain Biking: Mountain biking is not allowed on the Scuppernong Trails. You can mountain bike at the nearby John Muir Trail system