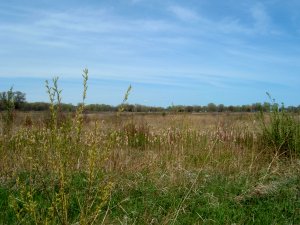 A series of protected prairie and wetland areas running north to south parallel (just inland) to the Lake Michigan shore. There are a few short trails suitable for walking and nature observation though probably best suited to the serious prairie fans rather than the average recreational trail user.

Chiwaukee Prairie State Natural Area is not really one place. It is a series of protected tracts of land located along a corridor that runs along Lake Michigan from the City of Kenosha south to the Illinois state line. The Prairie is broken up by sections of privately owned residential properties. There is a map available at http://dnr.wi.gov/org/land/er/sna/sna54.htm that shows all sections of the Chiwaukee Prairie.

It’s important to note that this is a “natural area”, not a “recreational area”. Though there are a few sections of trail here, they are not marked, may or may not be maintained, and there are no facilities. The trails that do exist are rather short and straight and probably not that interesting to most recreational trail users. The terrain is extremely flat and the scenery is basically open prairie and wetlands with a few scattered trees. Some sections of trail may be very wet (swampy areas up to a foot or more deep) and there is a significant tick population. Let me say once again that there is a significant tick population here. And you'll find these ticks stay active from April all the way through November (I believe this is due to the moderating temperatures provided by Lake Michigan). I took my dog here once in early May (and he was leashed the entire time) and spent the next couple of days picking over 50 ticks off of him and 5 off of me. With the exception of some trails in the inland portion of the northern section of nearby Illinois Beach State Park which contain a very similar ecosystem to that of Chiwaukee Praire, he rarely picks up ticks on the other area trails. He won't be going back unless there's snow on the ground.

In my opinion, Chiwaukee Prairie is best suited for those with an above average interest in the plants and animals that make up a prairie and wetlands area. I think the average trail user (and I include myself in this group) would be better off spending their trail time on other Kenosha Area Trails and maybe occasionally view Chiwaukee Prairie from their bicycle as they ride the roads that run along the prairie and the lakefront.

Map_Notes The map I provided is of only one section of Chiwaukee Prairie. This is the largest section and the one with the most trails (although there really aren't that many trails here). The main trail running east to west is a grass covered access road and is generally dry. The main trails running North and South are mowed paths cut through the grasslands. There may be very wet areas on these trails especially just south of the East-West trail. Also, these trails can become overgrown very quickly if they are not maintained. You can also walk along the railroad tracks located at the west end of the prairie. There is plenty of room along the tracks but be aware these tracks are active and you may encounter fast moving commuter trains here.

You may encounter smaller paths that cross the main trails, I think these are all just animal trails that may occasionally get some human use. You can be assured there will be plenty of ticks waiting for you if you choose to explore these paths.

Kenosha Dunes (not shown on this map)is another part of Chiwaukee prairie where you can find some trails. See the Kenosha Dunes page for more details.